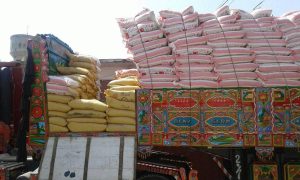 KARACHI: MCC Peshawar has lodged FIR against several persons including Afghan national for being involved in un-authorized export of fertilizers to Afghanistan.

According to details, in pursuance of information tipped to the Assistant Collector Customs Station, Torkham through the Additional Collector-II Fazal-e-Samad, Model Customs Collectorate, Custom House Peshawar that an attempt for export of huge quantity of DAP Fertilizer will be made by some un-scrupulous elements, through Customs Station Torkham.

The team tightened vigilance and the export vehicles were subjected to thorough search. The team while performing their duty noticed some suspected vehicles parked at the export terminal. The team kept the vehicles under observation for hours but none of the owners or drivers turned to the vehicles which further made the vehicles suspicious.

The team on the basis of suspicious further strengthen vigilance and found 07-vehicles parked at the export terminal but none of the driver/owner turned to the vehicle for hours. The Customs team therefore, sought help of the political authorities having administrative control of Torkham, Khyber Agency and the vehicles were moved to the National Logistic Cell (NLC) imports terminal and were parked there. Since, there was no sufficient space for un-loading of the goods, the vehicles were driven to the State Warehouse, Model Customs Collectorate, Custom House Peshawar for un-loading and proper checking/counting of the loaded goods/bags in the designated state warehouse.

The owner of the goods, owners of the vehicles along with drivers of the said vehicles and others are found in league with each other in un-authorized export of fertilizer.

It is interesting to note that the goods which were being exported to Afghanistan are of Indian origin. It raises questions that where did the Indian DAP came to Pakistan and for what purposes the commodity which contains explosive substances were being sent to Afghanistan.

It may be mentioned here that DAP fertilizer contains certain substance, which is being used ti making IED explosives in Afghanistan.

FIR lodged against smugglers and armed miscreants of Tariq Road