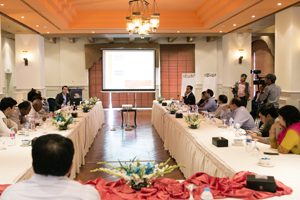 ISLAMABAD: The price differential between legal and tax-evaded cigarettes is a major challenge the government is facing that undermines its public health objectives one of which is to curtail cigarette consumption across Pakistan.

Moreover, formulation of effective policies and practical steps at governmental level coupled with social awareness and coordination among stakeholders are essential to curb mushroomed illicit cigarette trade in the country.

This was the consensus among participants at an interactive workshop, followed by a report launch, arranged by CRS Communications.

Speaking on the occasion, Jawwad Riaz, Senior Manager Nielsen Pakistan, said “One in every four cigarettes in the country is illicit. Alone in Pakistan, nearly 19.5 billion illicit cigarettes were consumed in the year 2014, out of which 17.3 billion or 89 percent were local non-duty paid. More than two billion cigarettes are smuggled into Pakistan as well and added into the illicit trade each year.”

He added, “Overall, 23.7 percent of the total cigarettes annually sold in Pakistan are illicit. In addition to billions in revenue loss to the government, local non-duty paid cigarettes undermine the country’s public health objectives by giving easy access to youth and encouraging youth smoking  by selling cigarette packs below the minimum tax payable on a cigarette pack. Shortly put, the pervasive illicit cigarette trade continues to grow by leaps and bounds.”

In his address, Aniq Zafar, CEO CRS Communications, said “In the backdrop of the aforementioned eye-opening scenario, it becomes essentially vital for all the stakeholders in Pakistan to not only develop an understanding of the existing conditions involving illicit trade in cigarettes but also take a consolidated and unanimous approach to play an effective role against this ever growing menace”.

“It is the right time for decision-makers to ridding Pakistan of the shackles of the ever-growing illicit trade in cigarettes and to help regain the revenues that have been lost by government as well as curb youth smoking,” Mr Zafar concluded.

According to Nielsen report, “The Challenge of Illicit Trade in Cigarettes: Impacts and Solutions for Pakistan’, the national exchequer suffers a mega loss of Rs 24 billion annually due to this practice. More alarmingly, Pakistan ranks fourth in Asia on account of its share of illicit cigarette consumption.

FBR to track and trace cigarettes as revenue enhancement measure