Customs values of Shampoos/Conditioners and Hair Spray/Gel/Wax/Cream/Colour/Oil/Hair coat/ Aqua/Hydrogen Peroxide Liquid/Developer/Accelerator, were earlier determined through Valuation Ruling No.814/2016. There were number of review petitions filed by importers against the said ruling. Since 90 days have passed and a number of representations were received from commercial importers and multi-national companies regarding values determined in the valuation ruling, hence an exercise was initiated to re-determine the values of subject items. 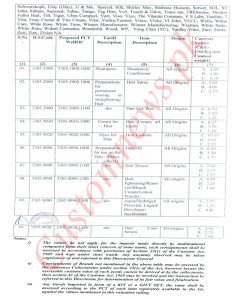 Closure of industry is economic suicidal and not a solution to control COVID: Ismail Suttar