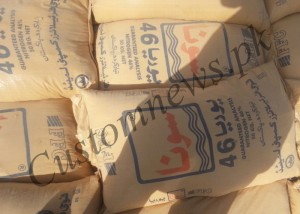 KARACHI: The Directorate of Intelligence & Investigation – Quetta has seized three trucks loaded with 1,700 bags of Diammonium phosphate (DAP) being smuggled to Afghanistan.

Urea is a precursor chemicals, which can be used to build explosive devices and one of the products on the radar of Program Global Shield.

Throughout the recent years the world has become a witness to increasing incidents of the use of the improvised explosive devices (IEDs) beyond the conflict zones. IEDs are the most prevalent form of explosives employed by terrorists around the world particularly because the precursor chemicals needed to manufacture them are cheap and widely available.

In a unique initiative to secure global supply chains and enhance public safety, the WCO has partnered with Interpol and the United Nations Office on Drugs and Crime (UNODC) and launched Programme Global Shield. This Programme aims at prevention of smuggling and illicit diversion of precursor chemicals that could be used to build IEDs.

Earlier, the Directorate of Intelligence & Investigation Quetta has foiled a bid to smuggle urea fertilizer to Afghanistan and seized 8360 urea bags along with 19 trucks carrying the commodity.

The market value of seized urea is around Rs20 million while seized trucks are worth Rs47.5 million.

According to the details,  in pursuance of information conveyed by Director General, Intelligence & Investigation — FBR, Islamabad, the staff of the Directorate of Intelligence & Investigation — Quetta in a major sting operation spanning over many days, with the assistance of Qilla Saifullah Scouts (FC) has seized 8360 Bags of Urea Fertilizer near Kadni Border post on Pak-Afghan border about 77 KIM north-east of Pishin.

The 19 trucks carrying the fertilizer being smuggled to Afghanistan have also been seized by the Directorate. This is the biggest ever seizure of fertilizer being smuggled across the Pak-Afghan border and will have salutary effect on the efforts of LEAs deployed at the border to stem the tide of rampant smuggling of fertilizer which has serious security implications due to its potential use in the preparation of explosives by the extremists.

It is also pertinent to mention that the Government of Pakistan provides substantial subsidy on local production as well as import of fertilizers in order to encourage the local farming community.