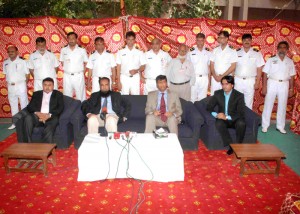 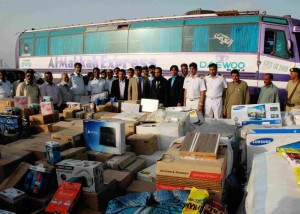 The value of passenger bus has been taken as Rs7.0 million. Total value of the case is Rs12.965 million. The seized goods were recovered from the said bus which was intercepted Lucky Chowk near Al- Rehman City, RCD Highway Karachi. FIR in the case has been lodged and efforts are being made to arrest the culprits.

Moreover, the Anti Smuggling Organization has seized huge quantities of smuggled POL products, contraband items and merchandise goods worth millions of rupees during the year 2015 so far.

It may be mentioned here that some ministers particularly of Balochistan have a soft corner for smuggling because of unavailability of employment opportunities as well as geo-political crisis in the province.

A couple of years back, collector Gawadar Dr Arsalan Subuctageen and his team were removed because of their relentless efforts against smuggling. The entire team was removed on the directions of an influential provincial minister.

Sources said that smuggling was only benefitting the smugglers while the masses were still deprived in Balochistan.

Smugglers have developed their links and contacts so strong that they guarantee deliver of smuggled goods to the destination anywhere in Pakistan. These smugglers make contacts on ‘done basis’. Special purpose buses are used for this purpose.

If anti-smuggling crack down cannot be undertaken in Balochistan beacsue of the patronage by influential elements, FBR should take strict action against these special purpose buses and these should be confiscated.