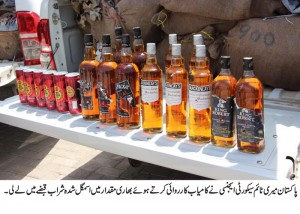 Collector Gwadar Saeed Akram had this information that smuggling of large quantity of contraband items would be smuggled.

Saeed Akram informed Pakistan Maritime Security Agency (PMSA)  about the operation. A joint operation was conducted at sea on August 20, 2015.

The suspicious boat was intercepted at sea while unloading the cargo at an isolated area near Makran Coast.

Taking advantage of darkness, smugglers managed to escape from the scene using small speed boats, however two smugglers were apprehended.

The apprehended high quality liquor and arrested smugglers have been handed over to Pakistan Customs authorities MCC Gawadar (Preventive) for further legal proceedings.

The arrested persons have been identified as Shamby s/o Mehmood and Wali Khan s/o Muhammad Baksh.

Sources said that Rear Admiral Jamil Akhtar has recently assumed the office of the Director General of PMSA. He has planned a grand operation against smuggling of diesel and liquor through sea routes.

According to the framework, PMSA would itself pursue cases, which they detected on their own. While the cases detected on the information of Customs would be handed over to Customs.

Customs auction of vehicles at Gwadar