KARACHI: Pakistan Customs has seized huge quantity of Hashish from a vehicle that was carrying live animal [for Sadqa (charity)] belonging to a big social welfare organization.
According to details Anti-Smuggling Organization of Model Customs Collectorate (MCC) Preventive on a credible information seized about 477 kilograms of the contraband in the shape of slabs / rod from a vehicle No P-0600HD making the total worth of Rs45 million. 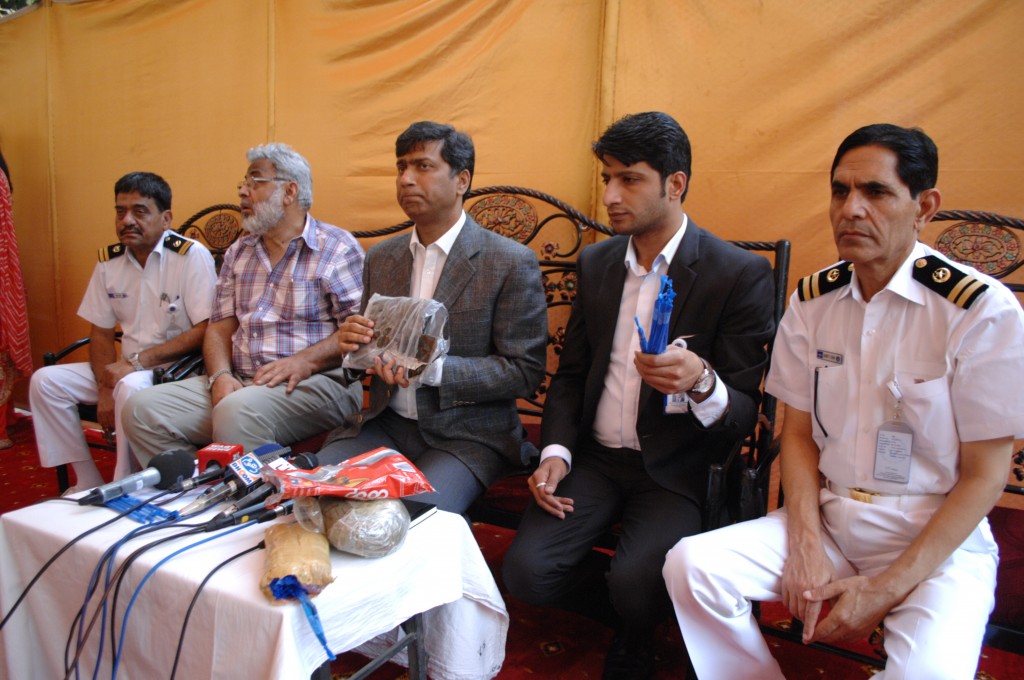 Tariq Huda, Collector Preventive shared the information at a press conference on Thursday stating that a modified Hino bus that was modified by removing seats and presenting it as cattle carriage that was meant for transportation of the contraband Hashish in the garb of live goats.
Pursuant to the information a special team of Customs officials was constituted headed by Assistant Collector of Customs / Headquarters, MCC Preventive, Muhammad Wasif Malik.
The Customs team mounted surveillance at the RCD Highway at Mochko Choke Point of Customs, Karachi. The bus loaded with goats was noticed coming from Hub side towards Karachi at about 0115 hours on March 24, 2014 which was signaled to stop but the driver accelerated its speed and after a chase of about five minutes the Customs team succeeded to intercept the same and bring it back to the Mochko Choke Point of Customs, RCD Highway, Karachi where a cursory search of the vehicle was taken in presence of musheers as a result of which contraband Hashish in the shape of â€œslabsâ€/ â€œrodsâ€ was found spread on first half portion of the floor of the vehicle concealed under three pieces of cloths and grass/Hay.
Sources said that three boys ageing 12-15 years were also arrested in this operation that were released later after investigation on the claim that the animal were belonging to them and they were looking after them. Interestingly to note that the customs authorities are concealing the name of the NGO, whom the animal were belonging, and were bringing to Karachi for Sadqa (sacrifices) purpose.
To a question about the latest incident of head-on collision at Hub road that claimed 25 precious lives due to additional tanks embedded with passenger bus carrying Iranian oil illegally, Huda said that customs authorities had wrote all the oil companies to send details of petrol pumps because whenever a tanker/vehicle intercepted they took advantage of belonging to certain oil companies.
Huda said that after getting details of fuel stations it would be easy for the authorities to demolish the illegal petrol pumps.
He said that anti-smuggling drive on the directive of Supreme Court was running with full swing and good understanding was established with other law enforcement agencies but due to polio eradication drive, the operation was slowed down.
It is worth mentioning here that the team of Anti Smuggling Organisation, MCC Preventive under the present management of Collector of Customs S.M. Tariq Huda, in a short span of time from August, 2013 succeeded in making remarkable cases/seizures such as launches carrying smuggled/non duty paid HSD oil, demolition of unauthorized nozzle pumps from RCD Highway and Northern Bypass, seizure of whisky from Ibrahim Hydri area which is a significant case as no liquor case of liquor has been effected since last 20 years from the coastal belt of Sind, seizure of Hashish recovered from a container lying at the Port Area, seizure of NATO containers which was a unique case in its nature as it unearthed the mystery of opening NATO containers, CNG cylinders, CNG kits, plastic dana (Polyethylene HDPE), carpets, black tea, milk powder, auto parts, Gutkha, POL products, Cigarettes, tyres, airconditioners, LED/LCD TVs, alongwith vehicles being used as conveyances worth millions of rupees. Millions of rupees have been realized against redemption of goods by the adjudicating authorities on account of duty/taxes and fine which has been deposited into the governmentâ€™s exchequer.